Why Baldwin Upright Pianos Are So Good?

The Baldwin Piano Company has a long history of creating high quality upright pianos that sound great and last forever. What qualities and benefits elevate a Baldwin upright over other upright pianos on the market today from Steinway, Yamaha, Kawai  and others?

Designs that have withstood the test of time.  All of the current Baldwin piano models are based on existing Baldwin designs once manufactured in the USA. The Acrosonic designer cabinet pictured here has been made for decades.

The current model 243 is from the original model 243 scale and stretched to 47″.  This is the biggest selling single piano model of all time. The engineers told me they were able to add longer length bass strings by stretching 2 inches and at the same time improve the depth of bass on this classic design while keeping the rest of the scale exactly as it was.  This piano is offered in the traditional satin black and satin walnut cases.  For years this piano competed against the Steinway 1098 studio in price.  If the 243 was still made in Arkansas the retail price would be up near the Steinway (25k).  Why is that?  The cost of labor in the USA is high.  Today this piano is a giant bargain with a retail of just under 10K and street prices more in line with Japanese pianos like Yamaha and Kawai which makes it a super bargain. 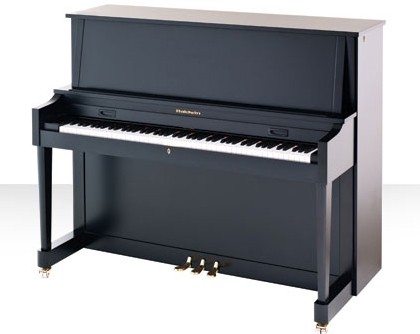 What makes an American piano brand sound American?  It’s about the process, wood, hammers and strings.  The process of making them by hand one by one is how Baldwin has always been made and how they are still made today. Unlike the automated production line pianos perfected by the Japanese companies Yamaha and Kawai, all Baldwin pianos are built the slow way allowing for more fine adjustment along the manufacturing process.  The same can still be said for the other two legendary American piano brands Mason & Hamlin and Steinway.  All American pianos like Baldwin, Steinway and Mason & Hamlin are made from dense hard wood maple frames.  Many pianos use lower density woods in the frame such as luan.  Luan wood being less dense absorbs sound energy rather than reflect it back on to the soundboard like harder woods such as maple do.

American piano designs use wet sand cast plates while Japanese makers use something called a V-Pro plate.  Wet send cast plates are poured from cast iron like church bells and cured in the elements for months. V-pro plates are made in a matter of minutes in a vacuum mold using a mix of alloys to make the cast iron harden quickly.  The alloys used in the V-Pro process can make the plate both absorb some sound energy and also cause unpleasant and unnatural harmonics.

All Baldwin uprights use Alaskan Sitka Spruce soundboards.  This material has been at the core of the Baldwin sound for generations.  Baldwin’s soundboard design is specially created to be tapered near the ends for greater flexibility and movement similar to the so called Steinway “Diaphragmatic Sound Board”.

All Baldwin pianos have a real working center pedal similar to a grand piano.  All other upright pianos makers (other than the one very expensive model at the very top of the line from other companies) have a center pedal mute and not an actual working musical pedal.  Knowing that the mute is a popular feature on pianos Baldwin includes this on all upright pianos on a switch while allowing the center pedal to be free to function like a grand piano pedal.  Baldwin is the only full line of pianos that allows the consumer to have both a mute and a musical performing center pedal on each and every model they make.  For Baldwin it’s all about the music.  Unlike their Japanese competitors Baldwin is only making one level of high performance pianos. Today there are no lower level pianos carrying the Baldwin name.

The hitch pin of a piano is where the string rests once a piano is strung. As you can see in the photo on the left, on all other piano pianos the string rests at the base of the hitch pin against the plate. Baldwin’s impressive adjustable Acu-just hitch pins (on the right photo) are found on all Baldwin uprights.  Acu-just hitch pins are an exclusive Baldwin patent and allow a piano technician to finely adjust the down bearing on the bridge by changing the position of the string on the hitch pin long after the piano is manufactured. This is impossible to do on any other brand since the strings are in a stationary placement. Many pianos when finished being manufactured have tonal deficiencies that can be traced to  excesses down bearing or too little down bearing.  Only on a Baldwin with this feature can a factory technician decrease or increase down bearing as needed to bring out the most from each individual piano.  Again, this is not available on any other piano brand. It is a system that can be finessed by the piano dealer during prep.  In the right hands, it is a very accurate and precise way to set bearing allowing one to individualize the bearing for each note.  (The first picture is the way a hitch pin on all other brands look like.  The second picture is of how the Acu-just hitch pin looks like in comparison.  The pin is cylindrical with an opening at the back for the adjustment tool.) 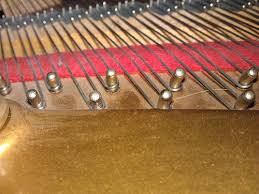 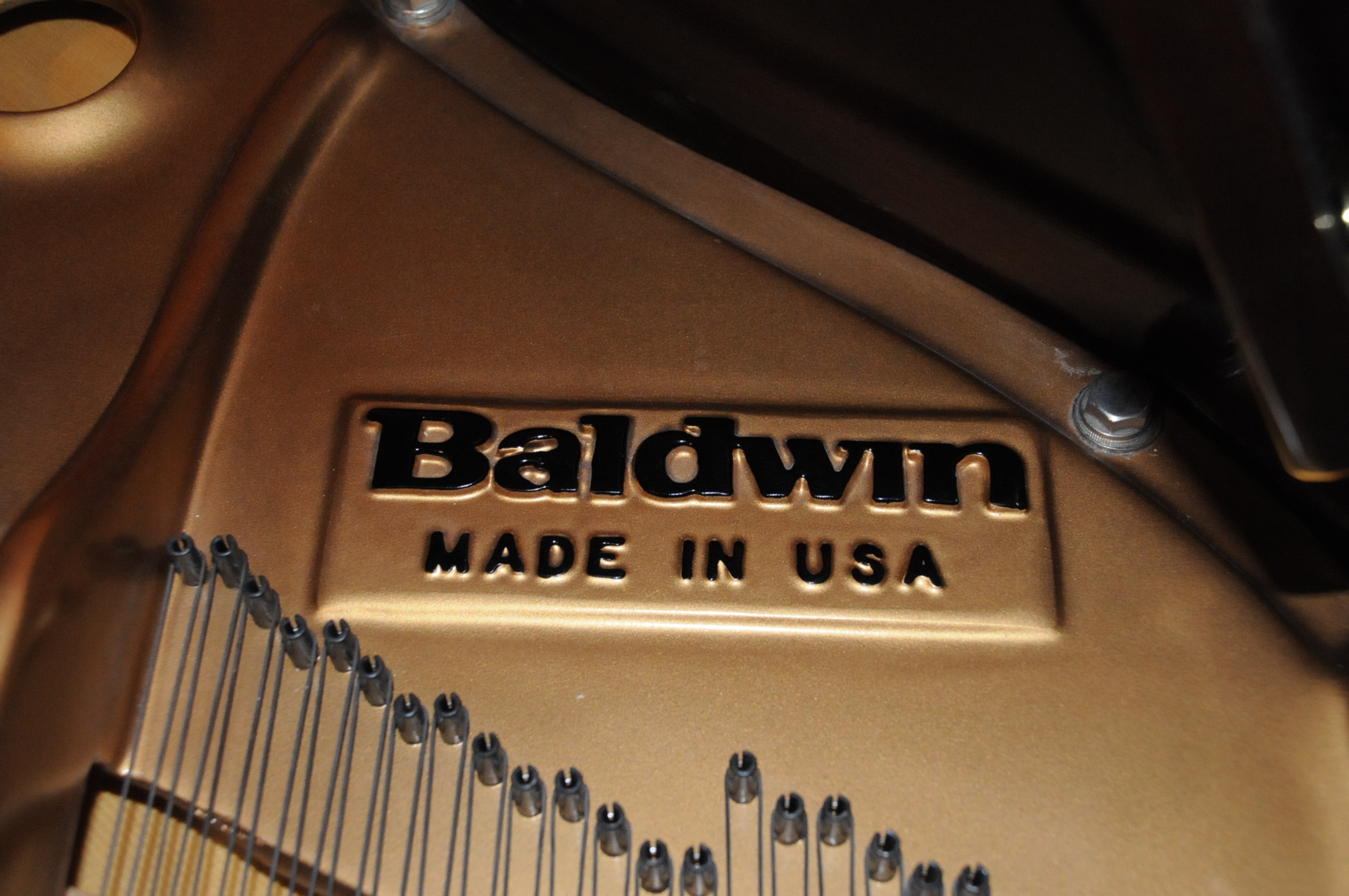 The Baldwin Model 248 is the basis for the current model BP5.  This is a big sounding piano with a full length adjustable music desk.  At nearly 50″ tall this piano has longer strings than many grand pianos.  Sitting between a Yamaha U1 / YU1S and Yamaha U3/YU3S in size and similar to a Kawai K500 in size but with the warm deep American piano sound of brands costing many thousands more.  Compare this piano and you will be amazed at the sound. We want you to compare this to the other pianos we mentioned here because we know none of the others can match the Baldwin tone.

The Baldwin B252 is derived from the 6000 concert vertical 53″ upright.  This is one of the tallest upright pianos on the market today. When it was introduced years ago it was meant to compete directly with a Steinway K52 in size and in price, but now priced 1/3 or more less!  If this piano was still manufactured in Arkansas the price would surely be $35k to $40k. Now this piano can be purchased for less than similar sized Yamaha and Kawai pianos.  This upright sounds like a grand piano.  It really does. While most other tall uprights sound like well, tall uprights.  This piano has the sound of a grand piano. Many unique materials and innovative designs contributing to this big sound are exclusive to this model only.  This piano features the patented “Tone Extender”. This ingenious device is attached to the bottom of the bass bridge adding more mass to the bridge.  There is a lot of technical mumbo jumbo I could insert here about the physics of this invention and how and why it works.  But bottom line, it make the bass on this piano sustain like a grand piano.  The accu-just hitch pins Baldwin uses on the bass section of all of their pianos are found on this piano but on every single note. That means bearing on every note on this piano can be adjusted after the manufacturing process. This unheard of advancement allows meticulous preparation of this piano by the expert Baldwin factory technicians.    We really encourage folks to go try out a Yamaha U3, Yamaha YU3S, Yamaha U5, Yamaha YU5S , Yamaha Su7, Kawai 800 or a Steinway K52 and then come in and compare it to the Baldwin Concert Vertical B252.  We feel strongly that at any price the Baldwin has the most “grand like” tone you can get from a vertical piano while at the same time offering a price advantage over them all. The value is staggering.

Comments Off on Why Baldwin Upright Pianos Are So Good?