Boston Pianos Or Baldwin Pianos, which is more like a Steinway & Sons?

If you’re familiar with pianos and piano pricing you may not be shocked at the prices of  new luxury level pianos including Steinway & Sons. If you’re not familiar with pianos and not looking in the luxury category, you might have heard of the name Steinway and decided to shop for one.  After you get up from the floor after hearing the selling price you might be shown a Boston piano as an alternative to a Steinway. The pitch is this, since it is also sold by Steinway and “designed” using many features and patents invented by Steinway,  it’s almost like buying a mass produced version of a Steinway. Sounds logical right?  Well not so fast. Let’s look at and trace the Boston piano from it’s humble beginnings in 1991. In 1991 with slumping sales of their higher end pianos Steinway decided to find a manufacturer who could offer their dealers a lower priced alternative to a Steinway & Sons branded piano. At that time Steinway’s investment holding company was owned by the Birmingham family based outside of Boston in Whaltham, MA. The new piano was to initially adopt the name of that city and referred to as the Waltham. Later the name of the larger metropolitan area of Boston was adopted. This was a created piano name that had never existed prior to 1991 or even had any Steinway & Sons historic significance. The Steinway piano headquarters are in Astoria, New York. Actually Astoria may have been a better choice for a random name since it has significance as the current and historical home of Steinway.  It’s a good thing that the Birminghams weren’t headquartered in Oshkosh or we might be talking about the OshKosh piano.(LOL) The first announcement of this new project came from the Kawai piano company. In their initial press release they stated to the Los Angeles Times they “would soon begin designing and manufacturing upright and grand pianos” for Steinway ( see LA Times below).

The hype from Steinway leads the consumer to a totally different conclusion of Boston being designed by Steinway using patented features (which by the way are standard on most pianos since 1900) from patents which had run out a hundred years ago.  Again in the article above from 1991 it quite clearly states in the  L.A. Times that Kawai said it “would soon begin designing and manufacturing upright and grand pianos” for Steinway.

From the Kawai announcement forward there was always purposeful confusion in the marketplace about the Boston piano, it’s pedigree and county of origin by some selling and promoting Boston pianos. There was an attempt by some sellers to imply that parts of the piano were US made. Or the pianos were 100% Steinway designed at a time when Steinway didn’t even have a full time R&D team. Some denied Kawai’s involvement completely. Then there is this; from the time of the Kawai announcement in the LA Times of a venture to design and manufacture pianos for Steinway until the time the pianos arrived in the USA was 9 months. They’d like us to believe that from announcement, to design, to manufacturing, to actually selling 5 models of grand pianos and 5 models of vertical pianos took only 9 months. And all of that without a full time Steinway & Sons R&D team in place at the time.  This is a nearly an impossible feat in the world of design and manufacturing of any kind of product let alone a complete piano line needing tooling for manufacturing and then actually manufacturing the pianos.  The only way this could happen is if large elements of the Boston pianos were already designed by Kawai and ready to go using existing Kawai parts and designs. The Boston is a very nice piano, but it’s not a Steinway and frankly it’s not even a Kawai.  Steinway of course would like one to believe that the Boston is superior to Kawai.  Hirotoka Kawai has said publicly they would never make a piano better than the one that bares the family name.  Here are a few posts form “Piano World” which reiterates this and why the Japanese workers making the Kawai and Boston on the same assembly line will expectedly favor the Kawai.

Currently the retail price on a Boston 5’10” $31,100. The retail price on the similar sized Kawai GL40 is $34,495, the GX2 is $45,495 and the SK2 is $68,495. Figure this, the piano has to be sold to Steinway low enough for them to make a fair profit. With the Boston being thousands less at retail than anything else Kawai makes imagine what it doesn’t have to meet the price point. Probably not the best investment in the piano world.

Why is a Baldwin grand piano more Steinway like than a Boston?

What are the elements of real American designed pianos? First, a maple inner and outer piano rim.  A piano is mostly wood and wood is the most important element in making a fine piano.  In a prior post we spoke about the superior sound and long lasting decay of tone produced by hard wood rims. In the case of American made pianos that wood is Rock Maple used in both the inner and outer rims of American designed pianos.  Steinway & Sons New York, Mason & Hamlin and Baldwin all use this wood for their inner and outer rims. Until 2009 Boston pianos used a Luan Mahogany inner and outer rim much like the other  pianos made in Japan.  In 2009 Steinway had Kawai upgrade the inner rim material to Hard Maple although the outer rim is still Luan (Philippine Mahogany). So which piano is more like a Steinway & Sons? A pianos with a Maple inner and outer rim like a Baldwin or a piano that has a Luan outer rim like a Boston?  A piano is 80% wood. The rim is a big deal for sound production.

Second Steinway & Sons pianos have a cast iron plate that is wet sand cast and then cured in the elements for months prior to being put into a piano.  This is the same process used in ALL Baldwin pianos.  A wet sand cast plate is superior since it is not prone to unwanted harmonics.  The Boston pianos like other pianos made in Japan have a vacuum cast plate.  This kind of plate speeds up the process using alloys to make it harden quicker allowing it to go into a piano the same day it’s cast.  The downside is unwanted harmonics from the plate. Again, which piano is more like a Steinway with it’s wet sand cast plate? The Baldwin piano which has the same plate and process as a Steinway or the Boston piano which has the same type of plate and process as all of the other pianos made in Japan? After the rim, the plate is the second largest element in a piano.  http://www.npr.org/2013/11/09/243988349/in-the-heat-of-the-foundry-steinway-piano-hearts-are-made

Third Steinway pianos are hand built the old fashioned way.  Baldwin pianos are hand built the old fashioned way.  That means the pianos are not built on an automated assembly line.  This allows greater attention to the details of tone.  Boston pianos are built on an automated production line in the Kawai factory. Coming down the same automated line as Kawai brand pianos with workers using most of the same processes for both brands. Both Steinway and Baldwin are made in factories without automated assembly lines.  Boston is not.  Which is more like a Steinway & Sons, Baldwin or Boston?

But the proof is really in the playing.  Here is what Dr. James Lent UCLA adjunct lecturer said in a published review of the Baldwin line of pianos from Pianobuyer.com.

The truth of the matter is Baldwin through it’s history always competed head to head with with Steinway and both provided the classic American sound.  The remarkable thing for Baldwin is this, since moving production overseas the model BP178 ($37,425) mentioned above as reminding the reviewer of his Steinway M ($72,500) costs nearly 50% less at retail than the similar Steinway.  The street selling price of the Baldwin can be 35% or more down from the MSRP list price. This is for a piano that reminds the reviewer of his Steinway M costing in the end twice to practically three times the price of the Baldwin piano. Baldwin Review

If someone truly likes the big American sound provided by Steinway or Mason & Hamlin but are not in that hand built American price range there are not many options.  The top quality Japanese pianos do not have the sought after American sound characteristics and you will pay more at street price for the highest quality pianos from the Japanese piano makers compared to a Baldwin piano while still not having the elements that make an American piano sound American.   The Boston which as demonstrated above has materials which bear more similarity to other Japanese made pianos then to American pianos.  Baldwin like Apple decided to build their products their way, but overseas. If they still built Baldwin pianos in Arkansas they would be nearly the price of the other American pianos.  The cost of the raw materials is the cost of raw materials. Because of their labor advantage and their superior materials they may very well be the best value in the piano world. 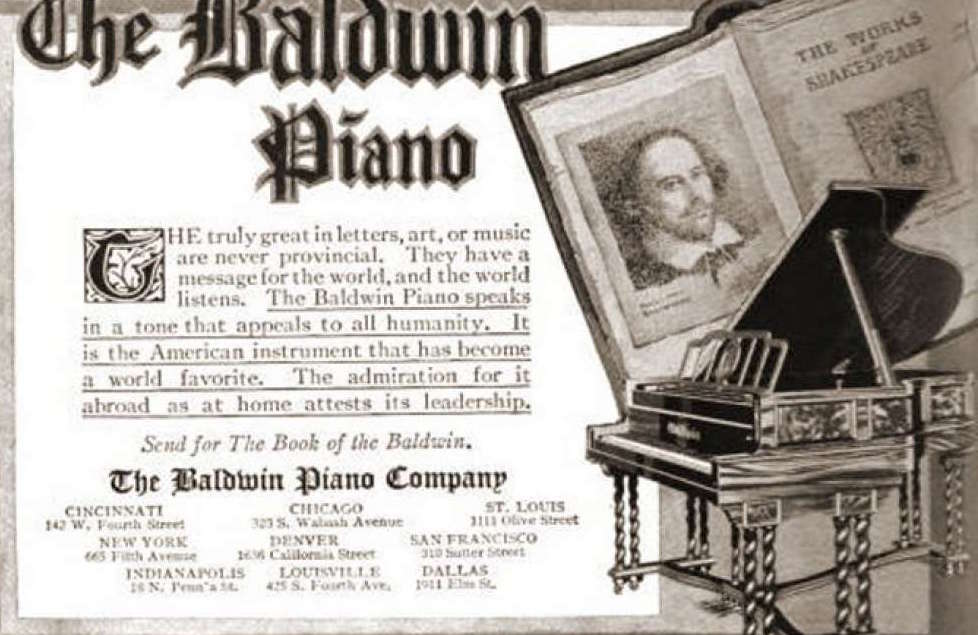 Boston touts as one of their benefits the wider tail allowing for a significantly larger sounding board and longer strings.  This is true compared to some other pianos but not Baldwin.  Baldwin pioneered the wider tail many years ago allowing their pianos nearly identical soundboard sizes with in the range of one to 4 percent which is statistically the same and in the model BP165, the Baldwin’s soundboard is remarkably 8% larger than Boston. The Baldwin’s all have inner and outer maple rims which ultimately give Baldwin the sound advantage. Here is a direct comparison of Baldwin Grands and the similar sized Boston.

As you can see the sale pitch of Boston’s wider tail providing a noticeably larger soundboard area than that of other pianos is in the end only a sales pitch compared to Baldwin. Baldwin’s 2 smallest pianos provide a distinct advantage. Baldwin’s smallest piano advantage is that it is 1.5″ smaller but with nearly the same size soundboard allowing you to fit it in tight spaces without sacrificing a big full sound.  Baldwin’s second size piano BP165 is a standout providing a nearly 8% larger soundboard than the Boston and with a longest speaking length bass string a full 1″ longer producing deeper richer bass tone. Even if the Baldwin soundboards were not of similar size but had a significantly smaller soundboard and significantly shorter strings Baldwin grand pianos would still sound better because of the Maple inner and outer rim.  The combination of that rim with the larger or similar sized soundboard and longer  or similar sized strings makes the Baldwin sound unbeatable compared to ANYTHING in it’s range. Baldwin’s two larger pianos have comparable soundboard size as the comparably sized Boston within 1.5% to 3 % and a feature not found on any Boston pianos, a hydraulic assisted lid allowing you to open the piano’s top lid with a single finger.  It also allows the heavy piano lid to fall with a slow descent.

If you want a new piano with that big, woody, round American sound, without the big American piano price tag the ONLY choice in a new piano is Baldwin.  Audition a new Baldwin and compare the sound to other pianos and you’ll understand immediately why it’s so good.

Comments Off on Boston Pianos Or Baldwin Pianos, which is more like a Steinway & Sons?