A Piano Is Made in 6 Steps

Clavichords and Harpsichords were the dominant keyboard instruments of the early Baroque period. Though pleasant in sound, these instruments were dynamically unable to translate the composer’s work because you could only play at one volume. This also became an issue with ensemble pieces in general since the keyboards could not match the consistent volume of the orchestra. Bartolomeo Cristofori’s new keyboard design, the Pianoforte, was named after the fact that it could be played both loud (forte) and soft (piano). So wait.. The piano evolved from the harpsichord but why is the sound so much different? Well, do you notice that subtle similarity between a harpsichord and a guitar? Here’s what the guitar has in common with the harpsichord that the piano doesn’t..the strings are being plucked. When Bartolomeo came out with his Pianoforte, he created a feature where the strings were now being hit with felted hammer instead of plucking, now allowing the piano to lean slightly more percussive, in a sense that the volume changed depending on how hard it is being hit. On top of that life-changing feature, this hammer action also allowed for the notes to be sustained until you let the key go. This would one day go on to become everybody’s new favorite toy whether you were a musician or not and even today, it’s safe to say that the anatomy of a piano intrigues almost anyone; most aren’t quite sure what exactly makes this monster, or how it creates its sound.

So how is a piano made? We’ve narrowed it down to six steps..

Bending the rim is the first step in building the grand piano. Long wood veneers are glued together to form a layer of the piano’s rim. In Yamaha, they use mahogany to form the rim while in Steinway uses maple woods. The layers are then glued together and laminated in order to form a longboard. After lamination, the board is then placed in a press where they will be shaped. The heat emitted by the press is controlled for the wood to maintain the distinctive shape of a piano case. The outer rim is then applied with resin-impregnated paper to make the surface more receptive in the finishing process. The inner rim is made similarly to that of the outer rim. 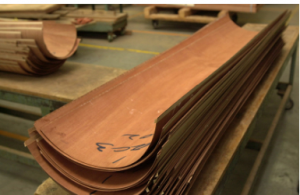 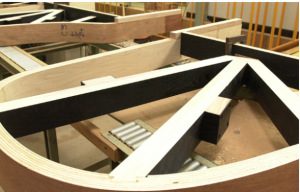 The soundboard is the most essential part of the piano. It determines the tone that will be produced by the piano. It is a thin wooden panel that is made of spruce. It is created by combining small planks from edge-to-edge. The large sheet is shaped and planed to the right thickness. Afterward, the ribs are then attached to the underside of the soundboard, and the short and long bridge will be attached to the opposite side of the ribs. 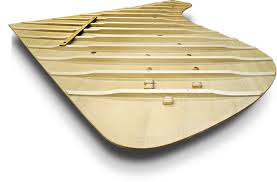 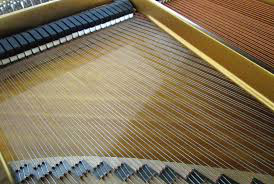 The keys are made from lightweight woods that are cut to shape. They are covered in either black or white plastic. The covers are molded and used to cover a group of keys that will be cut afterward. Guide pins will then be drilled on the undersides and capstone screws will be mounted. The keys will be cut into 88 individual keys and will be polished before it will be matched on the keyframe. 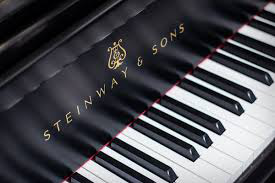 After assembling all the parts of the piano and the piano is built, it is time to put finishing touches. The piano will be sprayed with undercoat. If the undercoat is already dry and hard, the final topcoat will be applied and will be followed by the polishing process!

If you have any other questions for us, don’t hesitate to reach out at info@hollywoodpiano.com and stay tuned for future posts!