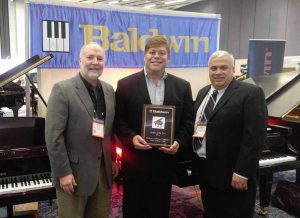 For the second year in a row Hollywood Piano is the number one seller of Baldwin Pianos in the USA.  Hollywood Piano is one of the oldest continually operating piano companies in the country.  Baldwin Piano company  is one of America’s oldest and most important companies.  Today Baldwin is part of America’s largest musical instrument maker, Gibson.

Hollywood Piano attributes their success in selling Baldwin pianos to the product itself.  Crediting the classic American sound of the Baldwins at a fraction of the cost of the other two American brands.  When you consider you can purchase a Baldwin for often times less than the comparable Japanese branded piano, the Baldwin with the deep American tone and long lasting decay is hard to beat when compared with the thinner short sustain of the comparable Japanese piano.