Many people may not realize it, but Yamaha actually started as a music company in the late 1800’s building reed organs. While the company has changed drastically over the years, the original Yamaha logo, which you can still find on almost all of their products, features a pair of tuning forks, interlocked to create a circular logo. While Yamaha may make some great motorcycles and other products, keyboard instruments have been at the heart of what Yamaha stands for since the beginning. 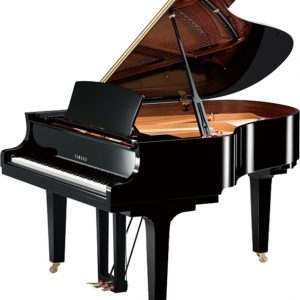 The Yamaha company is a multi national company that focuses on many kinds of products from motorcycles to semi conductors to pianos. While Yamaha pianos were once made only in Japan today Yamaha manufactures pianos in Japan, Taiwan, Indonesia, England and China.

While many piano teachers and tuners have concluded that only the Japanese made Yamaha pianos are the best pianos that the company makes, Yamaha has countered with a slogan saying it is the company of origin not the country of origin. What they often don’t point out is if they made their promotionally priced pianos from other countries better, it would hurt sales of their full featured pianos. So the quality of product from Indonesia and China is purely a choice by Yamaha to be “good enough” but not better than Japanese.

In many cases this has now made new Yamaha promotional pianos a poor value. While the Yamaha pianos made in Japan are good they are often too expensive for the value they give. Increasingly even the pianos that are “made in Japan” have many parts made in their off shore factories. That is why many people are turning toward a genuine pre-owned Japanese made Yamaha piano.

Yamaha pianos are also far more wide ranging than most people think. When one hears the name Yamaha they expect a certain level of quality that Yamaha was famous for which they still make in Japan. When the average person thinks of a Yamaha piano they associate it with artists like Elton John. The hard driving pop of Elton John is well suited to the percussive attack of the Yamaha piano. Conversely this attack that makes Yamaha popular among rock pianists is also what keeps it from being as popular among classical musicians.

Since 1928 Hollywood Piano’s Los Angeles Yamaha Piano Store for pre-owned has been the source for all piano sales, piano rentals and piano services

Most classical musicians prefer a piano with a sweet singing tone and even though Yamaha has been making musical instruments for years, there is a stigma attached to the sound of our Los Angeles Pre-owned Yamaha piano from people inside the classical music community. For years Andre Watts used a Yamaha and he was praised for his playing while the piano was routinely panned by the critics. He no longer plays a Yamaha. Still there are many fine qualities to a Japanese made Yamaha piano that is appealing to a number of pianists. A pre-owned Japanese made Yamaha is a good option today. If you are looking for the best quality in a pre-owned genuine Los Angeles Yamaha piano, check out Hollywood Piano Company for more information.