There’s no doubt that the Roland Corporation has been one of the most innovative manufacturers on the globe, not just in recent years but for the past few decades. Their replication of the acoustic sound and feel is what’s truly fascinating, considering they don’t make acoustics. Roland is strictly a digital company and what’s more is that they were in fact pioneers to the MIDI design in the early 80s. Plain and simple, the Musical Instrument Digital Interface is a globally standardized connection between electronic instruments and computers, along with other various forms of audio devices; it’s used practically everywhere today. After this, they later went on to release some of the cleanest sounding digital pianos you can imagine, giving the player that same acoustic grand touch.

It was 1982 and the music industry’s single largest trade organization was, once again, up and running smoothly. The National Association of Music Merchants has served as the central gathering place in the music gear industry since the early 1900s. But this particular year, David Smith, an engineer responsible for the world’s first microprocessor-based musical instrument and also the first programmable polyphonic synth, strolled through those doors with a revolutionary outline tucked away in his back pocket: it was a universal idea for a synthesizer interface that could create mutual compatibility.

Immediately, he began to arrange meetings with practically every single synthesizer manufacturer at that time; brands such as Moog, Arp, and Crumar were already beginning to make a stamp with their designs, but Smith was prepared to sell them on a pitch that they couldn’t ignore..Unfortunately, they all did. As the meeting went on, complications arose with the potential buyers and nobody was on the same page financially. It wasn’t long until the room started to clear out. However, as his saving grace, representatives from the companies of Yamaha, Korg, Kawai, and Roland were still potentially interested in Smith’s conversation.

After a few enhancements, the very first MIDI was successfully connected from Dave Smith’s very own Circuits Prophet-600 to none other than a Roland Jupiter-6, making Roland the very first company to take a huge successful leap in releasing this kind of technology. Roland believed in the technology but understood it needed to be refined for mass production.  Roland seized that challenge and conquered it.

Roland released a model with a built-in MIDI, the JX-3P synthesizer, and then shortly after, released the HP-300 and HP-400, the first digital pianos with MIDI.  This left quite a significant mark on the timeline of musical history because instruments could finally communicate, not just to one another, but through one another.

During the oscillation trend of ‘73, Roland, as a new company, sort of made their mark with the EP-10; piano engine with an oscillation base. Considering this was their first entirely electronic piano, it was clear within the digital industry that this name was, indeed, a force to be reckoned with. At that point, they began attending the annual NAMM show. The next year, they released the EP-30, which sensed playing velocities depending on how hard or how soft you played. It was the world’s first touch-sensitive Keyboard skyrocketing the company up to one of the best new brands at the trade show. As they continued to manufacture synthesizers throughout the 70s, their next digital piano release in ‘83 had….you guessed it, MIDI. Roland released the HP series (HP-400 and HP-500) going once again, where no other company has gone. Dave Smith’s technology on a DIGITAL PIANO, not a synthesizer.

Through the years, Roland continued to develop some fascinating digital pianos and in 2009, released the V-Piano. It uses absolutely no audio sampling whatsoever, it has the ability to actually create the same sounds of almost any piano. With this same technology, the V-Piano Grand came out two years later. I think what fascinates me is that this company has sort of ridden the wave of digital music evolution throughout the ages as technology has enhanced. The digitals that I personally love belong to Roland’s LX series, such as the LX705, 706, and 708. 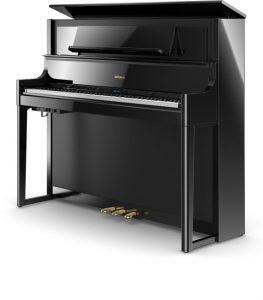 When you play an LX708, you just feel its richness. It has a progressive hammer action to give it such a naturalized sound and feeling..plain and simple, it’s just nice to play. We highly recommend this piano series for anyone in the market for a digital. Because of this evolution, it’s important to note that Roland’s contribution to musical technology makes their products extremely valuable in the hands of a true musician. So we encourage you to go check one out as well as stay tuned for what’s next to come from this awesome brand!